Why make a new model when you can update one you already have?

In umx, models can be modified. Want to free a path? Go ahead - no need to start from scratch. You can add, or remove most things, and re-run, and compare in one call.

umxModify is a convenience function to add, set, or drop parameters, re-name, and re-run a model.

For what follows, we’ll need a model, so: 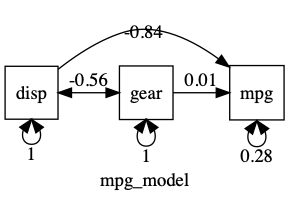 Fundamentally, modeling is in the service of understanding causality and we do that primarily via model comparison: Better theories fit the data better than do worse theories.

So, “do more gears give better miles per gallon”? In graph terms, this is asking, “is the path from to gear to mpg significant?” There are two ways to test this with umx.

You can then compare the two models

The easiest and most powerful way to modify models is with umx’s umxModify function.

For example, this one-liner drops the path “gear_to_mpg”, tests the effect, and returns the updated model:

A powerful additional feature of umxModify is regular expressions. These let you drop collections of paths by matching patterns.

So, to drop all paths with labels matching “gear_to_” followed by any characters, you could say:

nb: This is particularly powerful updating twin models with many paths to drop.

You can also update a model by passing in new objects to be added to the model, like a CI request:

Also, we seen that you can request the model comparison summary at the same time:

To run umxCompare() and report on the old and new models, just set “comparison = TRUE”

To free (instead of fix) a variable, set free = TRUE.

To set the value of the matched paths to value X (instead of the default 0), set value = X.

To update only parameters that are already free, set freeToStart = TRUE. This defaults to NA - i.e, state is ignored.

more than one thing

Most parameters can take more than one input. To drop two paths, just offer up two labels in update.

If you have a hard model to fit, you might want the optimizer to try extra hard. Just set tryHard = “yes”:

If you want to update a label, you can do so as follows: In this case, setting to labels to a single newlabel

note: this updates the model in raw units: standardized effects will likely differ. Best to work in standardized data for this sort of change.

As in mxRun, you can set intervals = TRUE to run confidence intervals (see mxRun)

note 1: For this to work, there have to be mxCIs in your model. See the post on mxConfint to learn more about confidence intervals.

note 2: SEs are often quicker and easier and are shown in the summary.